Two things that happened recently made me have the idea to write this article. I've written several articles about field-programmable radio frequency (FPRF) devices that can be almost universal wireless devices. I recently stayed in the hospital for two weeks, giving me plenty of time to consider wireless applications in hospital wards.

An important task for nurses is to record blood pressure, body temperature, oxygen saturation and heart rate every 1, 2 or 4 hours. This task is called monitoring vital signs. In practice, it involves scanning the patient's wristband barcode, connecting the device (if not already connected) to the patient, and manually recording the measurement.

In the UK we have the National Health System (NHS), which covers the entire country. Newspaper headlines about technical applications that improve the efficiency of NHS often focus on important initiatives such as trying to create a unified software environment. In this case, the goal is to connect larger general hospitals, regional health centers, small community hospitals, and family doctor's offices (also known as general practitioners in the UK). However, there is a high degree of local autonomy under the NHS, and the hospital I live in is already embarking on the popularization of electronic computers. However, computers are mainly used to record the use of drugs, not vital signs, which still require manual entry into paper medical records.

If every patient has vital sign data to read, say six times a day, each time it takes 10 minutes, then this job will allow the caregiver to spend 60 minutes per patient per day. I was surprised. Adding a simple wireless link can quickly automate this process.

So I am thinking, what is the problem that prevents the realization of automation? Special instruments seem to be an obvious obstacle. There are many major suppliers producing equipment, but they may not be interested in machine networking. Security is another major cause.

The dedicated machines actually used in hospitals are generally equipped with data interface connectors in the form of 15-pin D-type RS-232 serial ports. However, in a messy environment in a hospital ward, the idea of â€‹â€‹connecting cables to wall outlets every time is impractical. In other words, it seems feasible to use an external wireless communication module with a barcode scanner as a "second best" option.

Modern wireless systems provide a reliable link to connect hospital devices to local computers. A low-power Bluetooth (BLE) branded under the Bluetooth Smart is a good example of a ready-made configuration specification for specific medical applications. The first major limitation of Bluetooth low energy is coverage, which can theoretically be extended to 100 meters (330 feet), but may actually be limited to one room when used in a building. The second problem is the spectrum it uses â€“ the risk of interference in the crowded 2.4000 to 2.4835 GHz band.

However, in order to take full advantage of the integrated wireless system, it is required to have sufficient reliability over a longer distance so that any data read can be sent directly to the central control system of the nursing station, which involves several signals passing through. An intermediate ward wall and still detectable at 100-150 meters (300 to 500 feet). Lower RF frequencies, such as below 1 GHz, provide better penetration of building materials. For this reason, the 915MHz ISM band used in the United States, the 433.920MHz used in Europe, the Middle East and Africa (EMEA), and other VHF/UHF frequencies used in Asia provide excellent range performance.

The newly released FPRF device is considered to be the ideal solution to solve the wireless part problem. This chip (model LMS7002M) is user programmable from an extended range of 100kHz to 3800MHz, so it is easy to cover frequencies of interest to the user. In addition to programmable frequencies, users can control bandwidth and gain in real time.

The chip uses a dual transceiver architecture that uses a low-power, cost-effective solution from the input/output of digitized data to the RF portion of the modulated RF signal. The data input represents the synchronized (I) and quadrature (Q) components of the modulation in the form of a data bit stream. These data streams are filtered and converted to analog signals, which are then processed by separate I and Q paths, mixed with the programmed RF carrier frequency, and finally provided with modulated RF signals at the output of the chip.

The function of the receiver is to receive the wireless signal and demodulate it into an analog signal representing the I and Q components of the data. The receiver filters and amplifies the signal before converting it to a digital output stream. 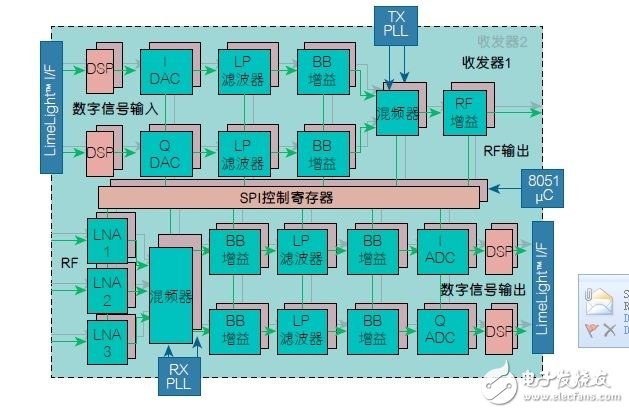 In the application under consideration, the wireless network can be configured in a variety of topologies, but in view of the relatively short cycle time (that is, once per hour), it is preferable to select a random access mechanism. The most common configuration is called Carrier Sense Multiple Access with Collision Avoidance (CSMA/CA). In this case, when the system needs to send data, it first "listens" on the carrier frequency to ensure that the carrier frequency is idle before the packet is sent. To facilitate this mechanism, the FPRF device includes a Received Signal Strength Indication (RSSI) function that detects transmitted signals on the wireless link. If the link is already in use, the device can be configured to wait for a preset amount of time and then retry or use a different frequency.

In order to enhance the reliability of the system, the central control system can be designed to send an acknowledgment signal to the vital sign monitor, and the signal can also be sent back using a separate RF channel. The sending node waits to receive an acknowledgment packet from the care station access point indicating that the data packet has been correctly received, decrypted, and passed the checksum check.

There are many ways to send a modulation mechanism. The simplest technique uses 2 bits per symbol and Quadrature Phase Shift Keying (QPSK), where the carrier is modulated onto one of four different phases with a single amplitude. QPSK supports low data rate transmission, which is ideal for poor signal conditions. In Quadrature Amplitude Modulation (QAM), the phase is shifted to one of a plurality of different angles and amplitudes for defining different bit positions in the constellation, and the data is up to 6 bits per symbol. QAM provides a more efficient modulation scheme for spectrum usage, but it is only suitable for conditions where signal to noise is better, which is not suitable for this application.

However, the latest transmission mechanism is called Multiple Input Multiple Output (MIMO), which is a complex configuration that uses two or more physically separated short-distance antennas. MIMO technology can improve spectral efficiency and achieve diversity gain that can improve link reliability. A key attribute of MIMO signals is that they provide more robust performance. This technology has been developed to cope with signal degradation due to fading and interference, and can also be used under multipath transmission conditions. Under multipath transmission conditions, signals reflected from the building will form a distorted signal at the receiving end. The LMS7002M is MIMO-enabled and provides the reliability and signal integrity required for medical applications.

FPRF is controlled by a baseband chip. The main function of this baseband chip is to receive data from vital signs devices, time stamp the data, and then group them into Ethernet packets for easy transmission. The chip will encode or decode the I and Q data streams and then load the LMS7002M through its JESD207 interface. It can program the transmit and receive frequencies, gains and bandwidths of the FPRF via the SPI interface.

Baseband functions are typically implemented using Field Programmable Gate Arrays (FPGAs) such as Altera Cyclone V SE for cost sensitive applications. These FPGAs have a wealth of logic, memory and DSP functions as well as one or two embedded ARM processors. The internal devices provided by the 32-bit ARM core can be connected to a logic matrix or execute external code. For example, the logic matrix, memory, and DSP unit can be configured to perform control logic, packetize data, and generate modulation patterns for MIMO technology. These functions can be configured according to the requirements of the ARM core on the chip and then instantiated for the required combination of functions.

The software running on the on-chip ARM core can also be connected to a barcode reader to identify the patient. It is then used to find and load the patient's unique encryption key. This key is used to encrypt the data to be sent in order to provide a high degree of security. The kernel also provides device intelligence to calculate and convert digital signals from vital signs sensors. The chip also connects to the front panel controller and display.

This type of FPGA is configured at power-up. Profiles are typically stored in external non-volatile memory (NMV) (such as flash memory) and can be used to program logic matrices and ARM cores. ARM executable code is also commonly found in NMV, which helps users update the NVM with new barcodes and associated key files in the hospital. 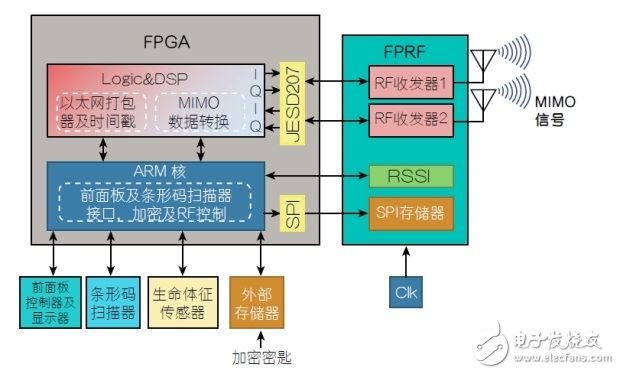 Good for the hospital?

Using manual methods to read and record vital sign data requires the caregiver to spend approximately 60 minutes per patient per day. In my ward where I live as a patient, there are a total of 40 beds, which means that this task requires about 40 nursing hours per day. If automation can save even 25% of the time, it can also allow the caregiver to free up 10 hours of work per day, which in turn can directly save money.

The accuracy and usability of the data being transmitted is equally important. Obviously, the automated process avoids errors in copying readings, reducing the possibility of false diagnostics. In addition, it is convenient to set reminders and alarm limits based on â€œper patientâ€ so that any abnormalities in vital signs can promptly alert the doctor and then take immediate remedial action. Results can also be recorded directly into a spreadsheet, and the data can be displayed in a tabular or graphical manner. This method can help the doctor's daily affairs and show the results over time.

In the case where the vital signs monitor is permanently connected to the patient, such as in an intensive care unit (ICU), the central controller can command the device to read the data as needed. This usage model requires local smart devices to monitor instruction information on the wireless link. Signal encryption ensures that each monitor responds only to messages related to the unit, ignoring messages from other devices.

Equipment manufacturers can add cost-effective features to their equipment to differentiate them from competitors' products. They can demonstrate the efficiency gains of innovation and the increased standards of medical care provided by hospitals. In addition, any increase in the marginal cost of the machine can be quickly offset by savings in care time.

The solution proposed in this paper can provide the latest electronic innovations worth using to improve the efficiency of the distressed medical care staff. This is a very heavy-duty application scenario, and the time it takes to collect and collate data is quite long. In addition, I'm sure there are many other applications in the medical device arena that can benefit from reliable and secure wireless links. What do you think?