Subwoofer, commonly known as subwoofer, most brands are promoted in home theater products with AV amplifiers plus five speakers and subwoofers. The subwoofer is an essential configuration. In fact, the design specifications and production are exquisite. A subwoofer with excellent results. Its effect in the audio playback of the home theater system is quite fascinating.

This article refers to the address: http://

First, the design principle and classification of the subwoofer cabinet

As far as the subwoofer design principle is concerned, it can be roughly divided into three categories, namely, closed type speaker, inverted type speaker and band pass filter type speaker. 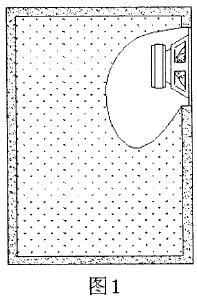 As the name implies, this speaker cabinet is completely enclosed, as in the general so-called closed box structure, see Figure 1.
The closed type speaker is characterized by simple structure and better transient response. That is, the sense of hearing is deep and clear. The disadvantage is that, under the same volume, the low frequency dive cutoff frequency is higher than other speakers compared to other types of speakers, so if you want to obtain a lower low frequency dive frequency, you usually need a larger box volume. And the speaker unit with larger diameter is selected, and the efficiency of the speaker is lower than that of other types of speakers.
In terms of cabinet volume design, there is an engineering design data for reference. When the resonant frequency Fs of the horn unit is lower than 50 Hz, the volume of the casing is preferably greater than 1.4 liters. When the Fs is greater than 50 Hz, the volume of the tank is preferably greater than 2 liters.
When closing and making adjustments, it is usually necessary to fill a large amount of sound-absorbing cotton in the box. The material is mainly made of glass fiber and long-fiber wool, which can improve the flexibility of the speaker and achieve the equivalent effect of increasing the volume of the box. Up to 40%, practically can be calculated according to the equivalent increase volume of 15%-24%, equivalent to reducing the volume of the box. In addition, filling the sound-absorbing cotton can also improve the efficiency of the speaker. The correct filling amount can increase the speaker efficiency by up to 15%. The number of sound-absorbing cotton usually needs to be repeatedly audited to determine the amount of filling, so that the sound is not turbid. Less), dull (too much) is the principle, as is the case with other types of speakers.
For closed-box subwoofers, the requirements for the unit are stricter than those of other types of speakers. It is desirable that Fs be lower than 40 Hz, Qts should be 0.3-0.6, and Fs/Qts â‰¤ 50. In addition to this, the unit diameter is preferably greater than 20 cm, and is a long stroke.
2, the inverted speaker is the most popular type of speaker on the market, the speaker is designed with an inverted tube, the so-called bass reflex design, see Figure 2. 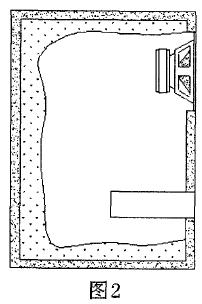 Inverted speaker, when the unit works at the resonant frequency Fs, the cone displacement is relatively small, so the power bearing capacity is higher, the resonance distortion is smaller, but below the resonant frequency, the cone displacement is greatly increased, and the resonance distortion is increased. In the same volume and unit conditions, the inverted speaker can achieve a lower low frequency dive cutoff frequency than the closed box. In addition, in theory, the efficiency of the inverted speaker can be greater than about 3dB of the closed box.
Of course, the design, production, and adjustment of the inverted phase speaker including the inverted tube is more difficult than closing the box. Inverted speakers also need to be filled with the right amount of sound-absorbing cotton, usually less than the closed box.
In the unit selection, Fs should be low dry 45Hz, Qts should be less than 0.5, and Fs/Qts should be around 100, the cell diameter should be greater than 17cm, in order to obtain a larger sound pressure power, the same as closed It is advisable to use a unit with a long stroke design.
3, band-pass filter speaker This kind of speaker is relatively rare, see Figure 3, Figure 4, it can be seen from the figure, it is developed on the basis of closed box and inverted speaker. There are closed box design Traces, also have the characteristics of the inverted speaker, wherein the speaker shown in Figure 3 also has a fourth-order speaker, and the speaker shown in Figure 4 can be called a six-stage speaker. 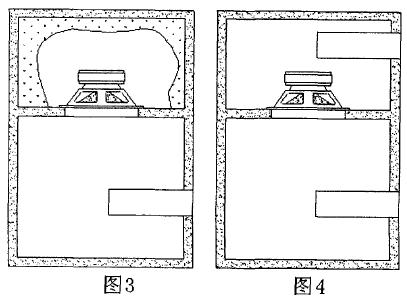 A. The fourth-order belt-type speaker adds an open cavity in the closed chamber. One part works in the closed mode and the other works in the inverted mode. Therefore, the speaker has the advantages of closed box and The characteristics of the inverted speaker, its efficiency is higher than the pure closed box, the low frequency dive cutoff frequency is similar to the inverted speaker, and the lower dangling cutoff frequency can be obtained with the smaller diameter unit. In addition, its bandpass frequency can be adjusted, so the divider can be simplified because the speaker itself is equivalent to a natural divider.
In principle, the unit selection is similar to the closed box, but since the efficiency is slightly higher than the closed box and the cone displacement is relatively small, a smaller diameter, short stroke unit can be used.
B. The sixth-order belt-type speaker adds an open cavity to the closed-box cavity of the fourth-stage belt-type speaker, that is, there are two open cavities, one of which operates at a lower frequency and the other operates at a lower frequency. At higher frequencies, the two have a frequency response with a certain bandwidth. Compared with the above-mentioned fourth-order speaker, the efficiency and bandwidth are more flexible, and the smaller and deeper units can be used to obtain lower and deeper. The bass effect, at the same time, the cone displacement is smaller and the resonance distortion is lower.
In the unit selection, basically similar to the inverted speaker, but Qts should be better at around 0.4, the cell diameter is basically not strict requirements, if you want to obtain high sound pressure power, low distortion output, the unit diameter is of course still Bigger is better.
Since the inverted phase hole with the type of speaker has a large airflow and sound pressure during operation, especially in the case of large dynamic and ultra-low frequency signals, it is a fourth-order band-type speaker or a sixth-order band-type speaker. The inverted tube should be as large as possible to avoid the sound of airflow during work.
In the design of the box, the value of the volume is not based on theoretical calculations in practical applications, especially the commodity box, which is mainly based on the aesthetic and dimensional coordination. The electroacoustic index depends on the inverted tube and the sound absorption. Cotton can be adjusted to achieve the best level. Of course, the closer the volume is to the calculated value, the better the performance can be achieved. In addition, in the box making, the role of the internal ribs can not be ignored, adding some reinforcing ribs at the joints of the box and the middle of the slab helps to reduce the resonance of the speaker, so the weight of the box is always good.

Second, the circuit composition Subwoofer is widely used in home theater systems, the reason is that the film audio decoding and reproduction process has obtained a subwoofer signal, whether in the analog Dolby system or today's very popular digital surround system, Since there is a subwoofer signal, it is necessary to have a special speaker to replay.
As for the analysis of the subwoofer circuit configuration, it is generally composed of preamplifier, low-pass filtering, phase adjustment, power amplification, protection, and power supply. For its function, the preamplification is to further the subwoofer signal output by the AV amplifier. Zoom in to the amplitude sufficient to drive the full power output of the power amplifier section, because the voltage of the subwoofer signal provided by each brand of AV power amplifier is not the same, generally ranging from 0.3 to 1 volt, so the preamplification is still necessary, and the preamp circuit has An important role is to play the role of isolation buffer, because the subwoofer signal output of each brand of power amplifier is different, and some manufacturers steal the material in design, resulting in high output internal resistance, if directly driving the power amplifier unit of the subwoofer It is possible that the effect is very bad; low-pass filtering is a relatively important unit in the circuit part of the subwoofer. Its function is to further filter out the signal above the low frequency in the subwoofer signal outputted by the power amplifier. The general design will be 80. -180Hz (many high-end products design the filter low-end cutoff frequency to be continuously adjustable), if For fixed-frequency filters, the value is generally about 110-150 Hz. The low-level speakers are prone to produce mixed-down sounds, which are too high, and can easily be mixed into the human ear's discernible music signals. The subwoofers used for each grade of AV amplifier output. Whether the signal is inverted or in the normal phase is not uniformly defined. Therefore, the phase adjustment is to use the subwoofer in the normal phase or in reverse phase according to the needs of the system connection when the subwoofer is placed. Depending on the effect, it is generally necessary; power amplification The unit does not need to be arrogant, it is the core of the active subwoofer. Similarly, to protect the subwoofer safely and protect the equipment from damage to valuable parts or to expand the fault during abnormal conditions, the protection circuit is generally necessary; It is the driving force for the operation of each circuit unit and is a basic component. It should be added that some subwoofers have recently designed the power automatic control function, so that the subwoofer automatically turns off the main power of the subwoofer when there is no signal.

This paper provides a well-designed sub-woofer pre-stage signal processing part of the circuit, in which the first stage is signal amplification, the level of amplification can be adjusted as needed, and the second stage is a subwoofer boost circuit below 50Hz, which is a general bass. The third stage is a frequency-adjustable low-pass filter with an adjustment range of 80Hz-200Hz, the fourth stage is an isolation buffer stage, and the fifth stage is a 0-180 degree phase continuous adjustment circuit. This is also a general bass. The functional unit that the gun does not have is very characteristic. The last level is also the isolation buffer level, and the last is the volume adjustment potentiometer. The production side, its three dual op amps can be used in general 4558, the power supply is regulated power supply Â± 12-18V, due to the small current, the power amplifier stage power supply can be obtained through the resistor step-down to simplify the design and production. Those interested in this circuit can be appropriately cut as needed. 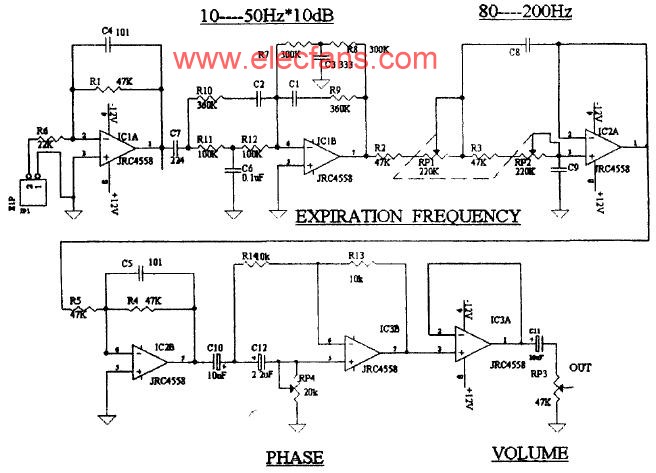 It should be added that the speaker production seems to be simple, but it is not easy to make a speaker with an effect and excellent listening. In amateur conditions, it is more difficult. If the unit parameters provided by the manufacturer are relatively standardized and the reference cabinet design guide is provided, it is relatively easy to make the speakers in amateur conditions, especially the subwoofer. Of course, this does not affect some senior audiophiles, with a spirit, after trial and error, debugging and amazing hearing to produce outstanding speakers.

Belttt's Universal Solar Charger Controller can use in street and home. It's sealed waterproof design. Waterproof is IP67. The controller has programmable function advanced, can use key to adjust parameters.Also it has automatic temperture compensation function, controller automatic adjust charging Voltage. It's very suitable for home and outdoor use.