Hard disk supply Q3 can not recover prices will not fall 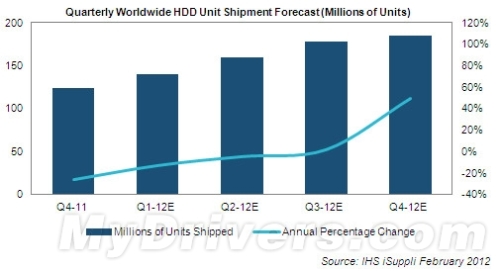 According to the latest report of market research agency IHS iSuppli, although the supply of hard disks in the first quarter of this year has recovered from the severe downturn at the end of last year, it still takes several months to return to the previous full capacity and supply. At least wait until the third quarter of this year.

In the fourth quarter of last year, global HDD shipments dropped by 26% year-on-year to only 124 million. The situation in the first two quarters of this year is also not optimistic. It is expected that there will be 140 million and 160 million pieces, respectively, which is still 13% less than the same period of last year and 5%.

It was not until the third quarter that year-on-year growth of 2% was achieved, reaching 178 million pieces, and by the end of the fourth quarter it would have been much better. Shipments of 185 million units had basically returned to normal levels, an increase of 49% year-on-year.

If you compare with the previous quarter, the shipment volume of HDDs in the fourth quarter of last year dropped by a large margin of 29%. In the first quarter of this year, it will increase by 13% from the end of last year, showing a good momentum of recovery. The sequential growth rate for the next three quarters is expected to be 14%, 11%, and 4%, respectively.

Western Digital, which has been hit hardest, has increased its capacity in other countries and regions and is expected to fully recover by September. Toshiba is also similar, but did not disclose when it will return to normal.

IHS storage analyst Fang Zhang pointed out: "The recovery of global hard disk production has begun and will continue every quarter of 2012, but full recovery will still require at least two quarters, because supply constraints have affected the rise of hard disk shipments, so we have to Wait until the third quarter. At the same time, hard drive prices will remain high, and inventory will continue to be empty, proving that the market is in short supply. By the end of the third quarter of this year, supply and demand should be able to return to balance."

The global hard drive price rose by an average of 28% in the fourth quarter of last year. In the first two quarters of this year, it is expected to decline by 3% and 9%, respectively. However, the whole year of 2012 will be higher than in previous years. Coupled with the merger of Western Digital/Hitachi and Toshiba/Samsung, the competition in the hard disk industry will be greatly weakened, and even if everything returns to normal, the average price level of the entire industry will be higher than before the flood.

The traditional glass neon tube investment is high, using glass tubes, high-voltage electricity and inert gas, making the production process complicated. The flexible neon lamp adopts a new structure and LED technology, and the special PVC shell is coated with LEDs, which increases the intensity and uniformity of light.