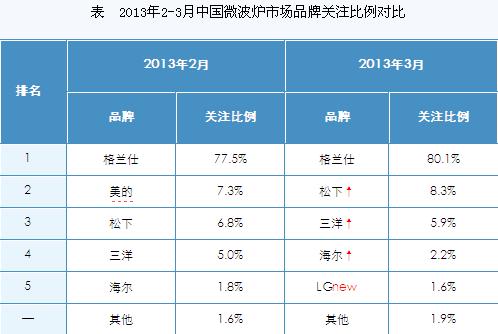 In March, China's microwave oven market still maintained a market-focused pattern in which Galanz was dominant and other brands competed. This month's computer-based microwave ovens are still the mainstream market. Among them, Galanz G70F20CN3L-C2 (BO) continues to be the most popular product for consumers. In the price segment, 501-1000 yuan has a share of more than 60% of the attention, which is the mainstream price segment of the market.

Report Highlights â€¢ Brand Focus: Galanz continues to focus on championships, with a focus on 80.1% this month.

â€¢ Product type structure: The computer-based operation products are up to 80.4%.

â€¢ Product capacity structure: 20L and 23L are the mainstream product capacity in the market, with a cumulative proportion of attention reaching 84.6%.

â€¢ Price segment structure: 501-1000 yuan is the price segment most concerned by consumers.

â€¢ Analysis of mainstream manufacturers: The percentage of Galanzâ€™s attention this month has declined slightly at the end of the month.

â€¢ Galanz continues to lead the Chinese microwave oven market In March 2013, Galanz continued to lead the Chinese microwave oven market. This month, the ratio of concern exceeded 80 percent, reaching 80.1%, up 2.6% from February. At the same time, Panyu, Sanyo, and Haierâ€™s attention rankings rose by one per month, with 8.3%, 5.9%, and 2.2% respectively. In addition, this month's LG brand watch list ranked fifth, focusing on a ratio of 1.6%.

Second, product attention to the pattern

(I) Product Focus Models â€¢ Product Watch List was held by Galanz and Panasonic In March 2013, in the Chinese microwave oven market, the top ten products in the product list were covered by Galanz and Panasonic. Among them, Galanz owns nine products. It also reflects Galanz's obvious advantages in product focus. This month, the Galanz G70F20CN3L-C2 (BO) continues to be the most popular product for consumers. Its focus is 20.6%, which is a 2.0% drop from February. This 20L capacity, 700W power, computer-operated microwave oven product price of 579 yuan this month, unchanged from the previous month.

(III) Product Capacity Structure â€¢ 20L and 23L are the mainstream product capacity in the market In March 2013, on the Chinese microwave oven market, 20L and 23L capacity products together accounted for more than 80% of the market's attention, with a cumulative proportion of attention reaching 84.6%. Of these, 20L continues to be the most concerned about by 44.2% of consumers, followed by 23L, followed by 40.4%. The proportion of other capacity products concerned is relatively small, all below 10.0%.

Third, the analysis of mainstream manufacturers

(I) Analysis of brand trends â€¢ Galanz's attention ratio has declined at the end of the month In March 2013, the proportion of the Galanz brand in China's microwave oven market has basically fluctuate around 80.0%, with only a slight decline at the end of the month. As can be seen from the chart, Galanz paid attention to the ratio of 84.7% at the beginning of this month, and then the trend remained stable. It remained at 77.3% on the 29th, and then the proportion of concern began to decline. Finally, it fell to the lowest value of this month at the end of the month 66.3%, compared with the beginning of the month. A decrease of 18.4 percentage points.